Topological phases of matter arise in distinct fermionic and bosonic flavors. The fundamental differences between them are encapsulated in their rotational symmetries—the spin. Although spin quantization is routinely encountered in fermionic topological edge states, analogous quantization for bosons has proven elusive. To this end, we develop the complete electromagnetic continuum theory characterizing 2+1D topological bosons, taking into account their intrinsic spin and orbital angular momentum degrees of freedom. We demonstrate that spatiotemporal dispersion (momentum and frequency dependence of linear response) captures the matter-mediated interactions between bosons and is a necessary ingredient for topological phases. We prove that the bulk topology of these 2+1D phases is manifested in transverse spin-1 quantization of the photon. From this insight, we predict two unique bosonic phases—one with even parity C=±2 and one with odd C=±1. To understand the even parity phase C=±2, we introduce an exactly solvable model utilizing nonlocal optical Hall conductivity and reveal a single gapless photon at the edge. This unidirectional photon is spin-1 helically quantized, immune to backscattering, defects, and exists at the boundary of the C=±2 bosonic phase and any interface-even vacuum. The contrasting phenomena of transverse quantization in the bulk, but longitudinal (helical) quantization on the edge is addressed as the quantum gyroelectric effect. We also validate our bosonic Maxwell theory by direct comparison with the supersymmetric Dirac theory of fermions. To accelerate the discovery of such bosonic phases, we suggest two probes of topological matter with broken time-reversal symmetry: momentum-resolved electron energy-loss spectroscopy and cold atom near-field measurement of nonlocal optical Hall conductivity. 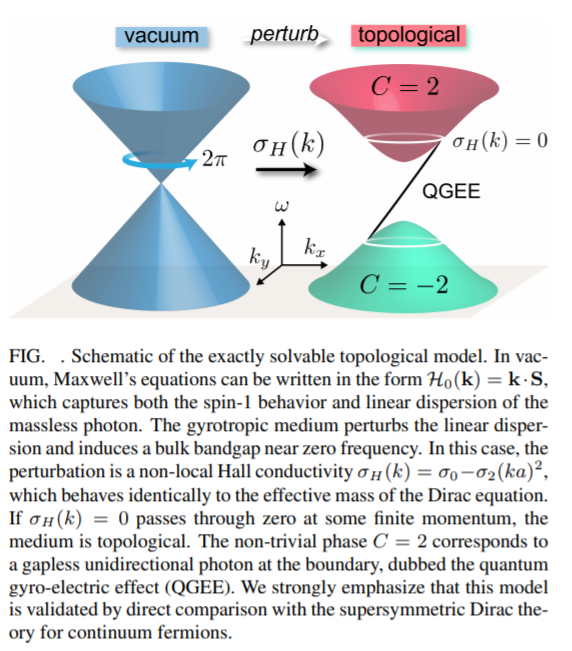 We introduce the concept of a photonic Dirac monopole, appropriate for photonic crystals, metamaterials and 2D materials, by utilizing the Dirac-Maxwell correspondence. We start by exploring the vacuum where the reciprocal momentum space of both Maxwell’s equations and the massless Dirac equation (Weyl equation) possess a magnetic monopole. The critical distinction is the nature of magnetic monopole charges, which are integer valued for photons but half-integer for electrons. This inherent difference is directly tied to the spin and ultimately connects to the bosonic or fermionic behavior. We also show the presence of photonic Dirac strings, which are line singularities in the underlying Berry gauge potential. While the results in vacuum are intuitively expected, our central result is the application of this topological Dirac-Maxwell correspondence to 2D photonic (bosonic) materials, as opposed to conventional electronic (fermionic) materials. Intriguingly, within dispersive matter, the presence of photonic Dirac monopoles is captured by nonlocal quantum Hall conductivity–i.e., a spatiotemporally dispersive gyroelectric constant. For both 2D photonic and electronic media, the nontrivial topological phases emerge in the context of massive particles with broken time-reversal symmetry. However, the bulk dynamics of these bosonic and fermionic Chern insulators are characterized by spin-1 and spin-½ skyrmions in momentum space, which have fundamentally different interpretations. This is exemplified by their contrasting spin-1 and spin-½ helically quantized edge states. Our work sheds light on the recently proposed quantum gyroelectric phase of matter and the essential role of photon spin quantization in topological bosonic phases. 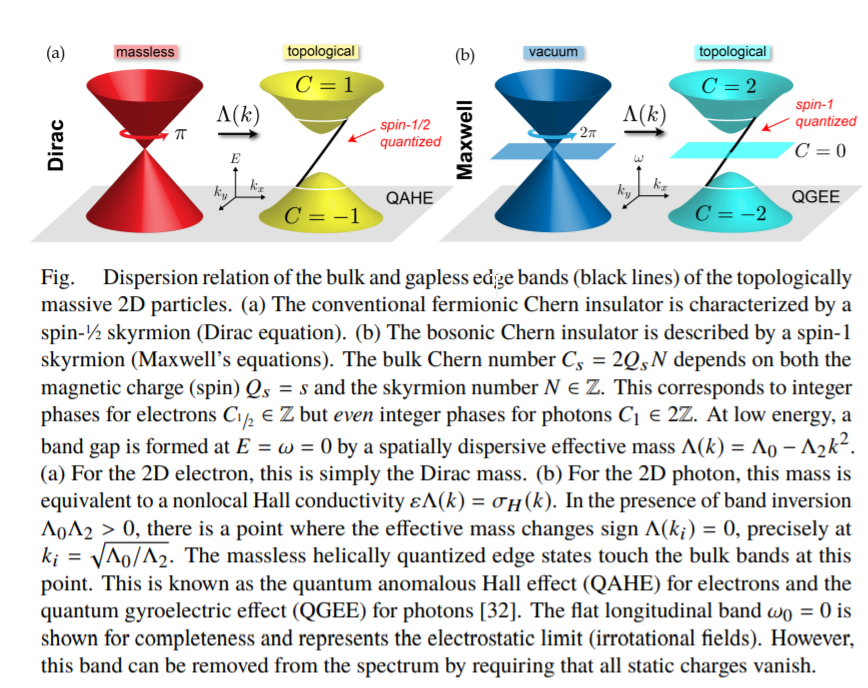 In (2+1)-dimensional materials, nonlocal topological electromagnetic phases are defined as atomic-scale media which host photonic monopoles in the bulk band structure and respect bosonic symmetries (e.g., time reversal T2=+1). Additionally, they support topologically protected spin-1 edge states, which are fundamentally different than spin-12 and pseudo-spin-12 edge states arising in fermionic and pseudofermionic systems. The striking feature of the edge state is that all electric and magnetic field components vanish at the boundary, in stark contrast to analogs of Jackiw-Rebbi domain wall states. This surprising open boundary solution of Maxwell's equations, dubbed the quantum gyroelectric effect [Phys. Rev. A 98, 023842 (2018)], is the supersymmetric partner of the topological Dirac edge state where the spinor wave function completely vanishes at the boundary. The defining feature of such phases is the presence of temporal and spatial dispersion in conductivity (the linear response function). In this paper, we generalize these topological electromagnetic phases beyond the continuum approximation to the exact lattice field theory of a periodic atomic crystal. To accomplish this, we put forth the concept of microscopic photonic band structure of solids, analogous to the traditional theory of electronic band structure. Our definition of topological invariants utilizes optical Bloch modes and can be applied to naturally occurring crystalline materials. For the photon propagating within a periodic atomic crystal, our theory shows that besides the Chern invariant C∈Z, there are also symmetry-protected topological (SPT) invariants ν∈ZN which are related to the cyclic point group CN of the crystal ν=CmodN. Due to the rotational symmetries of light R(2π)=+1, these SPT phases are manifestly bosonic and behave very differently from their fermionic counterparts R(2π)=−1 encountered in conventional condensed-matter systems. Remarkably, the nontrivial bosonic phases ν≠0 are determined entirely from rotational (spin-1) eigenvalues of the photon at high-symmetry points in the Brillouin zone. Our work accelerates progress toward the discovery of bosonic phases of matter where the electromagnetic field within an atomic crystal exhibits topological properties.

Chern-Simons theories have been very successful in explaining integer and fractional quantum Hall phases of matter, topological insulators, and Weyl semimetals. However, it remains an open question as to whether Chern-Simons theories can be adapted to topological photonics. We develop a viscous Maxwell-Chern-Simons theory to capture the fundamental physics of a topological electromagnetic phase of matter. We show the existence of a unique spin-1 skyrmion in the viscous Hall fluid arising from a photonic Zeeman interaction in momentum space. Our work bridges the gap between electromagnetic and condensed matter topological physics while also demonstrating the central role of photon spin-1 quantization in identifying new phases of matter.