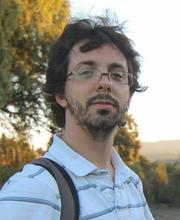 Dr. Adrian E. Rubio Lopez received his Ph.D. in Physics from the University of Buenos Aires, Argentina in March 2015, developing a path integral approach for nonequilibrium physics of quantum field theories, with immediate application to the area of Casimir physics. After, in his first postdoc (also in Argentina), his research focused on radiative heat transfer at the nanoscale integrating his previous studies with quantum fluctuations. In 2017, he moved for a postdoc position in the Institute of Quantum Optics and Quantum Information (IQOQI) in Innsbruck (Austria), where he studied the physics of nanoparticles within thermalization processes from out-of-equilibrium conditions. He also enter the problem of radiation reaction for point-like objects showing that zero-point fluctuations prevents the theory to fail at a fundamental level. In March 2021, he joined the group for investigating the quantum field correlations in non-equilibrium scenarios including several sources.