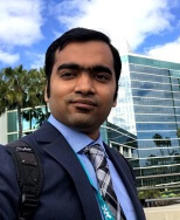 Dr. Avra Bandyopadhyay did his Bachelor’s in ECE from West Bengal University of Technology, India in 2011. Later, he got admitted to the MS program at the Indian Institute of Technology (IIT), Kharagpur. His MS thesis focused on high-k gate dielectric formation on Silicon-Germanium and its characterization. After completing his MS degree, he also worked as a Senior Research Fellow on Non-volatile memory devices using Semiconductor Quantum Dots at the Materials Science Center, IIT Kharagpur. He joined the department of ECE at the University of Texas, El Paso in January 2016 and got transferred to the EE department, University of North Texas, Denton in January 2018 where he completed his Ph.D. in 2020. During his Ph.D. he worked on vapor-based synthesis of 2DLMs such as WSe2, analysis of their optical, electronic, quantum, thermal properties, and their integration into electronic and optoelectronic devices. His current research centers around high temperature thermal metamaterials. Apart from work, he enjoys travelling, photography and filming short stories.