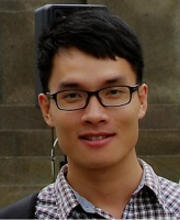 Dr. Fanglin Bao received his B.S. degree in Physics in June 2011 and PhD in Optics in June 2016 at Zhejiang University. His previous research focuses on the Casimir effect within an inhomogeneous system, including the renormalization of the Casimir energy, the inhomogeneity-induced correction to the normal Casimir force, and lateral Casimir forces in inhomogeneous systems. His current research interest extends to tensor networks, neural networks and their applications in quantum physics.