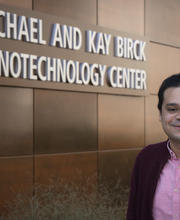 Mohamed received his Bachelor's degree in Electronics and Communications Engineering from Cairo University in 2017. During his undergraduate studies, he was involved in the research and design of 5G transceivers system. Mr. Mousa was awarded his Master's degree in Engineering Physics from Cairo University in 2021. During his MSc studies, he invented a new filtering technique for rapid Raman identification without using Raman spectrometer. He also worked as a part-time RFIC design Engineer at Analog Devices Inc. (ADI) from 2017 to 2021. For this period, he designed integrated circuits for 5G applications which became commercialized since then. He joined Zubin's group in fall 2021 to work on magneto-optical interactions for nanoscale devices such as MTJs and SPAD arrays. During his free time, Mohamed enjoys swimming, cycling, and hiking.