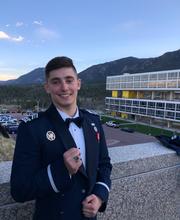 Second Lieutenant Ricardo de Bastos grew up in Denver, Colorado, and he received his Bachelor of Science in Electrical and Computer Engineering from the US Air Force Academy in 2022. During his undergraduate studies, he was involved in the research, design, and construction of a Pulsar detection system. He is attending Purdue University to work towards his Masters in Electrical and Computer Engineering during his first assignment in the Air Force. His research at Purdue University primarily focuses on Thermal Infrared/Hyperspectral Imaging and its applications for the US military. Ricardo’s other academic interests include RF engineering, microelectronics, and aeronautical engineering, and he hopes to explore these subjects further through flight testing for the US Air Force. During his free time, Ricardo enjoys skydiving, flying, hunting, and golfing. After graduation, he will attend pilot training at Sheppard Air Force Base in Wichita Falls, Texas.