Resonators fold the path of light by reflections leading to a phase balance and thus constructive addition of propagating waves. However, amplitude decrease of these waves due to incomplete reflection or material absorption leads to a finite quality factor of all resonances. Here we report on our discovery that evanescent waves can lead to a perfect phase and amplitude balance causing an ideal Fabry-Perot resonance condition in spite of material absorption and non-ideal reflectivities. This counterintuitive resonance occurs if and only if the metallic Fabry-Perot plates are in relative motion to each other separated by a critical distance. We show that the energy needed to approach the resonance arises from the conversion of the mechanical energy of motion to electromagnetic energy. The phenomenon is similar to lasing where the losses in the cavity resonance are exactly compensated by optical gain media instead of mechanical motion. Nonlinearities and non-localities in material response will inevitably curtail any singularities however we show the giant enhancement in non-equilibrium phenomena due to such resonances in moving media. 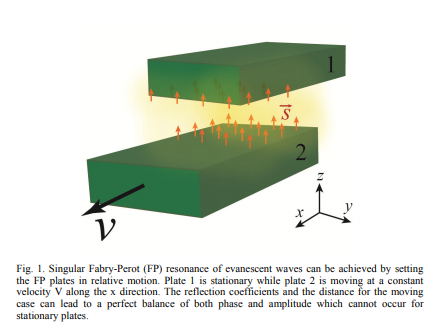 We recently reported on the existence of a singular resonance in moving media which arises due to perfect amplitude and phase balance of evanescent waves. We show here that the nonequilibrium vacuum friction (lateral Casimir–Lifshitz force) between moving plates separated by a finite gap is fundamentally dominated by this resonance. Our result is robust to losses and dispersion as well as polarization mixing which occurs in the relativistic limit. 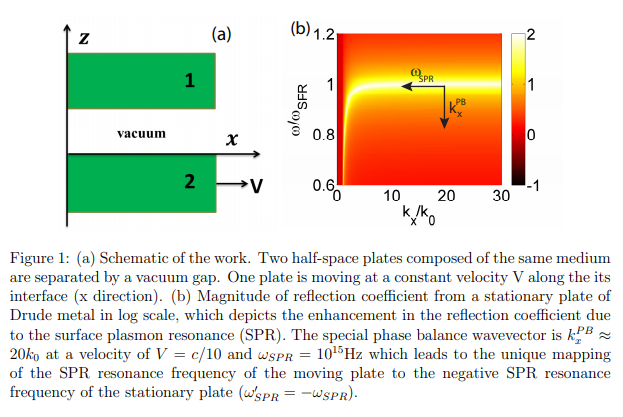