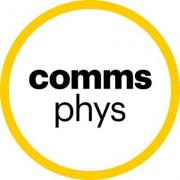 Here, we develop a quantum framework and put forth the concept of quantum structured light for space-time wavepackets at the single-photon level. Our work deals with three-dimensional angular momentum observables for twisted quantum pulses beyond scalar-ﬁeld theory as well as the paraxial approximation.

Our work can lead to quantum spin-OAM physics in twisted single-photon pulses and opens explorations for phases of light with long-range spin order.

Check out the publication in Communications Physics.