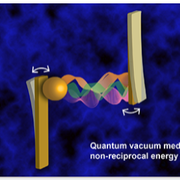 Purdue researchers have made a breakthrough demonstration of controlling energy transfer mediated by vacuum fluctuations. They have proposed and demonstrated a non-reciprocal, diode-like Casimir device. Their results were published in Nature Nanotechnology.

A striking prediction of quantum mechanics is that a vacuum is not empty but full of virtual photons (quantum fluctuations) because of the zero-point energy. These virtual photons lead to an attractive force between neutral plates in a vacuum, known as the Casimir effect. The Casimir effect is important in fundamental physics and plays an essential role in micro-and nano-devices.  Ever since the Casimir effect has been realized, physicists have made efforts to study it- both theoretically and experimentally- attempting to create functioning devices.  Tongcang Li, Associate Professor of Electrical and Computer Engineering and Physics and Astronomy at Purdue, and his team have now created a functional device using the quantum vacuum.

A new Nature Nanotechnology publication titled "Non-reciprocal energy transfer through the Casimir effect" demonstrated is a breakthrough in utilizing quantum vacuum fluctuations to regulate energy transfer at the nanoscale and build functional Casimir devices.  All authors of this paper are from Purdue University, which includes Li, Zubin Jacob, the Elmore Associate Professor of Electrical and Computer Engineering at Purdue, and Li’s graduate students, Zhujing Xu, Xingyu Gao, and Jaehoon Bang.

According to the article, the Casimir effect can dominate the interaction between microstructures at small separations and is essential for micro-and nanotechnologies. Even though scientists have studied this effect before, a non-reciprocal device based on quantum vacuum fluctuations remained an unexplored frontier.  That is, until now.

“We need to break the reciprocity to create essential devices such as diodes, isolators, and circulators,” says Li. “In our new work, we proposed and demonstrated a non-reciprocal, diode-like device that rectifies energy transfer by the quantum vacuum fluctuations between two micromechanical oscillators. It is fascinating that we are able to measure and control the ultraweak quantum vacuum fluctuations experimentally.  Our work opens up the possibility for utilizing a quantum vacuum to realize more complex and advanced devices.”

The first author of this publication is graduate student Zhujing Xu.

“In the experiment, we modulate the separation between two optomechanical cantilevers at the nanoscale. These cantilevers are tiny resonators which are glued together by vacuum fluctuations“ says Xu. “We designed a novel dynamical control protocol to break the symmetry of the gluing between the two devices”.

In the future, researchers plan to develop practical nanoscale non-reciprocal devices based on quantum vacuum fluctuations.

“This experiment settles a long-standing question whether non-reciprocity, an everyday feature of device physics, can be embedded into vacuum fluctuations,” says Jacob.  “It will open new frontiers for the control of vacuum fluctuations using engineered resonances and new materials.”

This research was funded by the DARPA Nascent Light-Matter Interactions program and the Office of Naval Research.